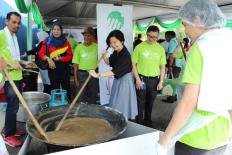 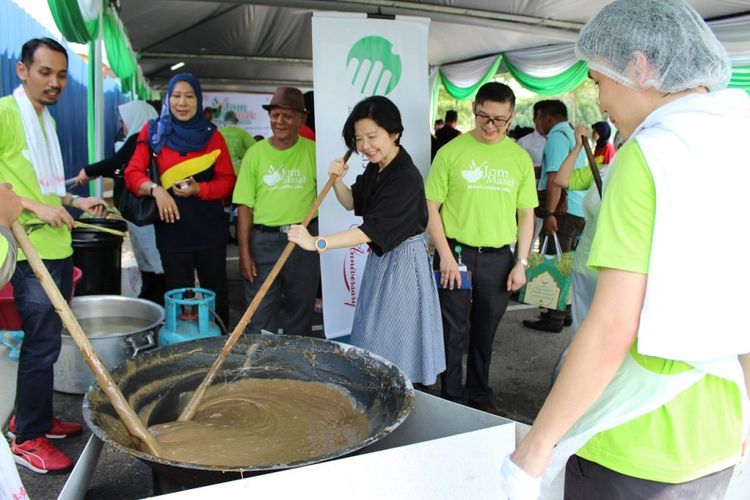 REGENCY SPECIALIST HOSPITAL’S JOM MASAK BUBUR LAMBUK EVENT A HIT WITH THE SERI ALAM COMMUNITY
Fostering the spirit of Ramadhan with the community it serves in line with the hospital’s tagline, “Hands that treat, Hearts that heal”.

Johor Bahru, 16 May 2019 — Regency Specialist Hospital (RSH), Johor, cooked up to 5,000 bowls of bubur lambuk (a rice porridge dish popular in Ramadhan) for the Seri Alam community during its Jom Masak Bubur Lambuk community event yesterday, made possible by hospital management and staff as well as participating partners.

This is the fifth time RSH has organised this event that first started in 2012 with the hospital catering the bubur lambuk and eventually cooking it themselves since 2015. This event became a hit with the local community with the number of bubur lambuk cauldrons increasing from 15 when it first started to 20 this year.

Serena Yong (杨美力), Chief Executive Officer of Regency Specialist Hospital, in her welcome speech said, “We first started our Jom Masak Bubur Lambuk community event back in 2012 where we only distributed 2,000 bowls of bubur lambuk. Ever since then, the Seri Alam community has been very welcoming of our efforts, which is something we all look forward to during Ramadhan. I am also pleased to share that more partners are reaching out to join us in this event, which goes to show just how far the community spirit extends in Seri Alam. Without a doubt, this event will continue to strengthen ties and promote unity despite it being a simple act of cooking and distributing this popular Ramadhan speciality.”

The cookout started at 8am at Green Gravity, Seri Alam, where around 200 participants involved in the preparation and cooking gathered to begin the day’s activity. The recipe of this bubur lambuk that originated from the hospital’s kitchen chef who is relatively known for his home recipe delicacies. The ingredients and spices were sponsored by Regency Specialist Hospital.
In addition to bubur lambuk, there was also dodol (a traditional festive sweet toffee) in the making led by the Head of Community of Seri Alam. This saw participants helping one another in a lively atmosphere that truly captured the spirit of Ramadhan.

The event was later graced by councillor Mr Ku Chee Chien where a total of 1,000 bowls were distributed to the public in areas such as Stulang Laut Ferry Terminal, Today’s Market Seri Alam, Tesco Seri Alam and Senai International Airport while 2,500 bowls were gifted to hospital staff and partners involved. “The community at Seri Alam would benefit from efforts such as today. Not only were they gifted with the traditional Bubuk Lambuk but also the freshly made dodol that will complete the sweet taste and memories of Ramadhan provided by all who were involved in the organizing and preparation of the event”, said Councillor Mr Ku Chee Chien.

The event also saw certificates of appreciation being presented to participants who then carried on with the cooking and packing of the bubur lambuk while some were preparing to distribute them for free to the public to be enjoyed during buka puasa for the day. Joining the fun of cooking and distributing the goodies, Yong also commented, “This is a great community event to promote and preserve tradition and culture. The cooking brings togetherness that can help build the spirit of respect and understanding amongst local community.”
Partners for this year’s event include Ibu Pejabat Daerah Seri Alam, UITM, UniKL MITEC, SAJ Ranhill, Ahli Majlis Seri Alam, Seri Alam Properties, Johor Port, Pasir Gudang Municipal Council, Aussie Coffee/Starbucks, Masjid Seri Alam, Pru BSN Takaful, PGEO Edible Oil and Kelab Media Johor.

Like all previous Jom Masak Bubur Lambuk community event, this year’s affair will further strengthen ties between Regency Specialist Hospital and the people it serves in the Seri Alam community. Aside from creating a tighter bond between its staff and partners through the team work involved in preparing and cooking of bubur lambuk, the event also showcased the hospital’s commitment to serve not just via quality healthcare services but also extending community kindness that starts from the heart.

Source: The Iskandarian and The Star